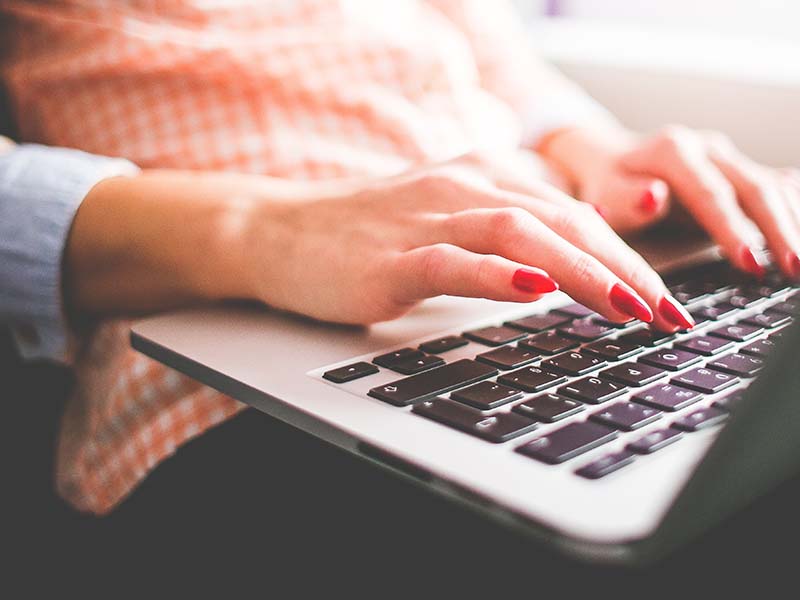 Normally above 9000 Keystrokes per Hour considered as good speed and over 9000 as a high-speed typing. WPM means a number of words you can type within a minute. Generally, 50 to 70 WPM considered as a good typing speed. Here we discuss Online Typing Test In English.

Regular practising is very significant. Make a routing first then follow the routing. If you can manage to practice 20 minutes a day for 2 months you will get a good result and your typing speed may reach 60 WPM easily.

Improve your typing speed by using the touch typing method.

It is the main factor that can improve your typing skill. There are many typing methods available. You may choose any of it, but the touch typing method is the fastest and most accurate typing method.

In this method, the typist doesn’t look at the keyboard while typing. They memorize the keyboard layout. And as they focus on the source only, the typing speed automatically gets increased.

If you are a beginner, this will be a little difficult for you to use touch typing. But once you understand the process and your fingers get set on the keyboard, I am sure you will love this method. To learn touch typing, read this article: Touch Typing Course.

However, if you do not want to learn touch typing, you may go for the “Hunt & Peck” or “Hybrid” method. The “Hunt & Peck” method is the process where the typists read the matter, view content, and then find the keys and type. As this is a long process, it takes more time to type than the touch typing method.

Also, this method has another significant problem. As the person looks at the keyboard while typing if any error occurs, it is impossible to find out.

In this case, you may go for the Hybrid method. It is the combination of “Hunt & Peck” and “Touch typing” method. In this method, the typist memorized the position of major keys and fixed their hand position. They only move their fingers to type. In this manner, they manage to type fast.

You have to understand why you failed to increase your typing speed after a certain limit (50 to 55 WPM).

You failed because you are not focusing on silly things while typing. As you are focusing on the source and the keys that you press, you forget all other factors.

You forget your hand position, sitting position, arm position, hand-eye coordination, and some of you forget to use their small finger too.

Did you ever think why there are two shift keys present in the keyboard? Why your keyboards have the dedicated “10 key-box” and why the spacebar is so long?

Lastly, one thing is significant, dedication. You have to understand that there is no shortcut to increase typing speed within just 7 days. If you started typing recently, you might notice a minimal improvement, even after practising a lot, and this can make you frustrated. You have to understand it is not magic. Your typing speed can’t increase 10 WPM to 60 WPM within just two weeks of practice.

In last month we surveyed thousands of people of several occupations. We did the same type of survey earlier in the year 2019, but this time we did it on a vast scale.

We have divided the participants into four classes, back-office workers, students, typists and programmers. In this article, we will revile the detailed analyses of that survey.

Before scolding the survey result, I want to clarify that we conducted this survey online on our website. The participates of different age and occupation join this survey from different parts of the world.

But if you wanna be a good typist or a programmer you must have a WPM speed over 60. On average we can say 50 – 60 WPM is a good speed. According to a survey done by Microsoft Corporation, many HR, Managers expect their employees to be able to type above 50 WPM speed. So if you are preparing for a job you should target at least 50 WPM.

In our survey, we found that a 14 years old girl achieve 83 WPM speed. That’s mean it’s not necessary that students must have a typing speed between 35 to 50 WPM. There is no limit, so practice more and more to improve your typing further.

The record of being the fastest typist is in the name of Stella Pajunas Garnand. She made this record in 1946 by typing 216 words in one minute. She used an IBM model an electric typewriter to make this record. It is the fastest typing speed ever recorded in the world using a QWERTY layout.

According to some journals and The Guinness World Records, the fastest typist is Barbara Blackburn. Who made this record in 2005 by using a Dvorak keyboard. Her top speed was 212 wpm.

Women achieve both the records, so it’s entirely a wrong myth that the typing speed of girls is lower than the boys.

I hope this detailed report will encourage you to practice typing more and improve your typing speed. Remember the average typing speed of a professional typist is around 60 WPM with more than 98% accuracy rate.

If you are a student, a teacher, an office representative or a programmer, in a simple word, if you are in a profession where you need to use a computer, a good typing speed can save a lot of time for you. That’s why people are getting interested to learn to type. Here we discuss Online Typing Test In English.