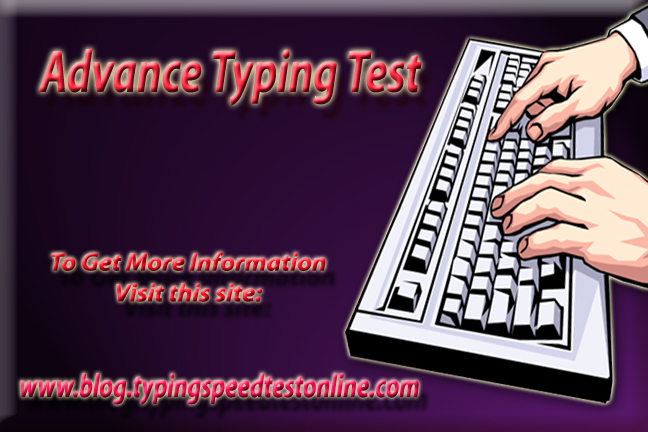 online typing test in English advanced A typing test is the measurement of typing skills in terms of speed (Word Per Minute) and accuracy on a computer keyboard. Typing test scores are also measured in Keystroke or Key depression per minute (KPM). Usually, a passage is given to a candidate for type in fixed time duration. Typing test evaluation is done by matching the given passage with the user’s typed passage and finding out errors. Therefore final WPM score is calculated using a mathematical formula.

The two factors will define the proficiency of the person in typing. Some typing tests used character-based calculation in which 5 characters count as a word, regardless of how many characters are in the particular word. This Character-based calculation has its own benefit like it independent from the text passage, there may be a more lengthy word in one passage than another, but it calculates the same speed all time.
Some typing tests used another calculation speed formula; it counts each bunch of characters separated by space one word. This is known as the word count method for typing tests. To understand it let’s take an example:
A Sentence “Here we are checking our typing speed.”
So Total Words (Using character methods) = 38 / 5 = 7.6 Words (space also count as a character)
Total Words (Using Word method) = 7 words
In this typing test above we have used the second method to calculate word count. In many exams, there are fixed word limits like 300 Words have to type within 10 minutes. Usually, 2nd method is used for the calculation of words, separated by space.
Therefore typing test above will show your typing speed in Word per Minute (WPM). Therefore Accuracy is gross and net speed ratio and net Speed. Thereby Net Speed will consider your final speed of typing. Here a highlighter will help you identify where you are in the passage. If you skip a word it will show in a result that you skipped a word. And if you double typed a word it will also be shown separately.

This is an advanced typing test designed for govt exam preparation. Thereby It will help you in crack typing test exams and will improve your speed of typing and accuracy. Check your typing speed and improve with continuing to practice the test on a daily basis.
Learning fast and accurate touch typing is needed for many kinds of government jobs in India. You want to improve your typing speed than doing more and more practice is the only solution. So You will see in some days your typing speed is increasing day by day. English the international language of the world and also the business and trade have done mostly in English around the globe.

how to speed up your typing

Typing is a skill, and sharpening it; You have to practice daily. No shortcut process can make you a fast typist in a few days. So be patient and keep practicing till you achieve the goal.
The first thing you need is a goal. Set your target according to your need. If you’re new, you shouldn’t be targeting an extended plan. Make small goals, achieve them, and then increase your limits. In this way, you can quickly improve your typing skills.
The next thing you should consider is following a proper schedule. So It is essential to be dedicated and consistent in the job. You can practice for just one hour a day but maintain consistency. If you practice for a few days but forget the next day, you will never be a good typist. So keep practicing daily.
Finally, the way you type. So Like languages, typing also has grammar and a set of rules. You better understand it first. In the touch typing process, the typist uses all his fingers to press the keys. Each key on the keyboard was designed to be pressed with a special finger. This is important because using all your fingers properly can increase your typing speed.

Why Online Typing Test in English?

If you are looking for a clerk or typist job, or if you are doing a typist job, then you must have good typing speed. Thereby Advanced English typing test software helps to increase your typing speed and efficiency. So Nowadays there is a lot of data entry jobs in the Government sector and private sector and it is very important to have good typing skill. Therefore, an English typing test is necessary for everyone who wants any job in the field of typing.

The WPM addresses words each second, and it is an extent of Typing speed, for the most part, used in the election cycle and Typing speed test English on the web. sO It is standardized to five characters or keystrokes. The benefits of a standardized assessment of data speed are that it enables assessment across language. Guarantee you start your Typing by memory with high accuracy. Your speed will create after some time.

The CPM addresses characters each second. So CPM is WPM apportioned by 5. A portion of the time people use a keystroke as an equivalent, notwithstanding, it isn’t something basically the same. Keystroke is the single hit on the control center. So for the capital letter “A”, which is a single person, we count two keystrokes. (Move + a)

What is the advanced typing speed?

In this advanced English typing test, you will practice complex words, numbers, and symbols. This is a vital typing lesson and if you can successfully complete and achieve at least 25 WPM in this advanced typing test, being an expert in typing is just a matter of time.

How can I check my English typing speed?

What is typing test English?

What is a Typing Test? A typing test is the measurement of typing skills in terms of speed (Word Per Minute) and accuracy on a computer keyboard. Typing test scores are also measured in Keystroke or Key depression per minute (KPM).

How do you type advanced faster?

For advanced typists: Practice. Develop muscle memory for typing certain types of commonly used letter pairings. Identify the combinations of letters for certain words that give you trouble and practice typing them in particular to the point where you no longer need to think when doing so.

What is Type touching?

Touch typing is a method of typing without the use of the sense of sight, or simply by feeling the keyboard. … This way, the fingers get so used to typing that they instinctively go to the appropriate keys without the typist needing to see or even feel around the keyboard.

Why do I only type with 2 fingers?

A keyboard for everyone

Some individuals use two-finger typing instead of keyboarding because they find it difficult to reach certain keys with a designated finger. They may end up typing two keys instead of one or pressing a key so the letter registers more than once.

How many fingers are used in typing?

Although the phrase refers to typing without using the sense of sight to find the keys—specifically, a touch typist will know their location on the keyboard through muscle memory—the term is often used to refer to a specific form of touch typing that involves placing the eight fingers in a horizontal row along the …

Is it okay to type with two fingers?

How can you make typing faster?