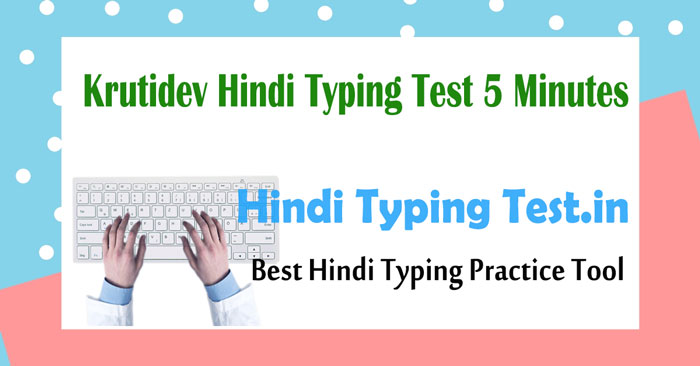 Krutidev Typing Test: First Of All, Check your typing speed and accuracy in Hindi using Krutidev or Devlys 010 font. Select word passage like 200 words, 300 words, or 500 words, and select timing like 1 minute, 5 minute, 10 minutes,s or 15 minutes and start. So The result will show in Gross WPM and Net WPM. The Hindi Typing Test facilitates a word highlighter feature that will help you to identify the word you are typing so you will not miss a single word during your Hindi Typing test.
Take Typing Test and check your typing speed, Keep in mind there is no shortcut to success, if you want good Hindi typing speed, practice is the only solution, practice more and more. So Krutidev is the most popular Hindi typing test font for Govt Jobs.

Why Hindi Typing Test is important ?

Uses of the Hindi language is increasing on computers day by day. To be able to work in Hindi on a computer one needs to be able to type fast and accurately in Hindi. The Hindi Typing test facilitates users to know their Typing score and taking a regular test improves their typing speed too. The Hindi typing test above highlighted users’ mistakes so one can work to remove their mistakes and achieve more speed next time.

How to Measure Typing Speed?

Typing speed in the measure in WPM means how many words one can type in 1 minute. Thereby WPM is derived by dividing your total typed words by total time in minutes. So The resultant figure is your typing speed in WPM. Usually, 5 characters are considered as a word for the purpose of calculation on an average basis. Alternatively, you use CPM or KPM (KeyStroke Per Minute or Key Depression Per Minute) also to measure typing speed.

There are two types of fonts are used for the Hindi typing test in India.

Taking more typing tests will improve your typing speed and accuracy. You can check the Krutidev Hindi Keyboard layout and download the Krutidev font also.

In the Kruti dev keyboard, you will not find certain Hindi characters. You can make them by using shortcut keys. These Hindi shortcut keys are made using character code with the Alt key. So You can check the complete list of Krutidev shortcut keys is here.

If you are looking for good typing speed with accuracy, you should take a Hindi typing course first. It’s free and online, just complete this course to be proficient in Hindi typing. The Hindi typing tutor is a self-learning module that will train you to step by step from scratch. With the Hindi typing master, you will be able to type without seeing the keyboard and learn the complete Hindi keyboard.

Other tools of Typing speed test?

How to test your typing speed

To test your typing speed in Hindi just type as many lines as you can in the above text box you can. So try to maintain a speed of at least 30 WPM to 40 WPM. Thereby Every correct word type will be marked as green and the red color is for the wrongly typed word. So When you have done typing according to your selected time frame. Your Result will display on the screen. Save it if you want to compete. Or just try again. As you wish.
So You can also try different paragraphs for typing practice. So If you are feeling bored by typing only some random words.

In Hindi, there are a lot of characters. So And it is very hard to remember every key and the character behind it. Thereby it is even harder if you look into the keyboard and then find the key which you have to type because in this case first, you have to remember what key should print the desired Hindi character.

So It becomes much-much easier when your finger itself knows what key to press to print the desired character rather than using your brain and eyes to remember what key prints what. Thereby Muscle memory is very important in touch typing and this can be only done through practice. So When a finger hits a key again and again on the same set of keys then slowly it starts to recognize the pattern of words. Hope you are finding it useful to read more to get wonderful tips for typing.

Officially there are only a few fonts that are asked in exams for typing in Hindi three of them are devs 010 font, Krutidev 010 font, and mangal font each of them is described below as what are the differences and similarities and differences between these awesome Hindi typing test fonts. Thereby Fonts are very important to know about because every Hindi font has a different layout. The key structure is not the same for every font, unlike Krutidev and device fonts. For an online Hindi typing test, an aspirant must be prepared for any of the following Hindi typing fonts also if you want to download this font we are providing a link at the end of every font’s description. You can click on the link below and easily download the font through respected websites and web portals.

Mangal font is a UI font used for typing Devanagari devlys . It is based on Unicode and is the best font for the web font. Many web developers and webmasters prefer this font over traditional fonts such as Krutidev and devlys 010 font because it is platform friendly and available in many browser’s support. We in typing way do not use this font for typing tests since it is asked very less in the government examination especially in India the percentage of this font asked in any examination is very low. Every exam is either asking Krutidevi or may be delayed for the online Hindi typing test. Download Mangle Font

This is the unit to measure typing speed of a typist, the more the better. When it comes to measuring the speed of a typist we always say that it is 60 WPM or 70 WPM or any number in WPM. So In our Typingway’s online Hindi typing test we have used the same unite to show you the result. Thereby The result in any online Hindi typing test will always be in WPM though some of them are also giving in key depression per second or keystrokes per second officially in the examination of any government organization it is always asked in WPM. In the Hindi typing test, it is very important to maintain the limit of at least 35 WPM or else it will increase the chance of your failure; but again it is only the lowest limit always remember “the more the better”.