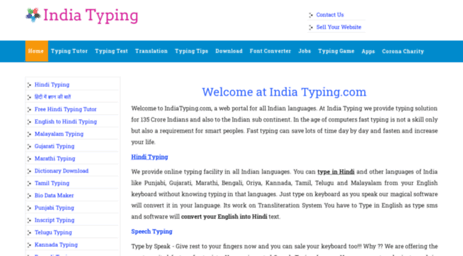 Normally above 9000 Keystrokes per Hour considered as good speed and over 9000 as high-speed typing. WPM means several words you can type within a minute. Generally, 50 to 70 WPM is considered a good typing speed. Here we discuss Advance Typing Test In English.

Regular practicing is very significant. Make a routing first then follow the routing. If you can manage to practice 20 minutes a day for 2 months you will get a good result and your typing speed may reach 60 WPM easily.

Improve your typing speed by using the touch typing method.

It is the main factor that can improve your typing skill. There are many typing methods available. You may choose any of it, but the touch typing method is the fastest and most accurate typing method.

In this method, the typist doesn’t look at the keyboard while typing. They memorize the keyboard layout. And as they focus on the source only, the typing speed automatically gets increased.

If you are a beginner, this will be a little difficult for you to use touch typing. But once you understand the process and your fingers get set on the keyboard, I am sure you will love this method. To learn touch typing, read this article: Touch Typing Course.

In this case, you may go for the Hybrid method. It is the combination of the “Hunt & Peck” and “Touch typing” method. In this method, the typist memorized the position of major keys and fixed their hand position. They only move their fingers to type. In this manner, they manage to type fast.

Did you ever think why there are two shift keys present on the keyboard? Why your keyboards have the dedicated “10 key-box” and why the spacebar is so long?

Lastly, one thing is significant, dedication. You have to understand that there is no shortcut to increase typing speed within just 7 days. If you started typing recently, you might notice a minimal improvement, even after practicing a lot, and this can make you frustrated. You have to understand it is not magic. Your typing speed can’t increase 10 WPM to 60 WPM within just two weeks of practice.

If you are a student, a teacher, an office representative, or a programmer, in a simple word, if you are in a profession where you need to use a computer, a good typing speed can save a lot of time for you. That’s why people are getting interested to learn to type. Here we discuss the Advance Typing Test In English.